As we anticipated on our website a few days ago, I (acting as the coordinator of Greening USiena) participated to a public meeting with European Commissioner for the Environment Janez Potočnik last friday. The initiative, which took place at Stazione Leopolda in Pisa, focused on  the challenge of achieving a sustainable use of resources within the European Union, and was aimed (like other similar events that occurred in Naples, Rome and Turin) at encouraging a mutual conversation between EU institutions, citizens, students and associations of the member states on different issues which are seen as key ones for the future of Europe.

Several topics were touched during the 2-hour debate, such as the need to abandon our current model of development if we are to meet the challenge of a sustainable society, the shortcomings of the industrial production of goods (including the urgency for longer life-cycles, better waste disposal and so on), the relationship between EU environmental policies and global sustainable development, green chemistry, rural areas’ role in globalization and, obviously, the short circuit that exists between the ongoing economic crisis, green investments and the protection of ecosystems. There was, however, a far-reaching (yet underrated) hurdle which kept recurring through all the talks, as it did not consist in a conceptual issue, but rather in a methodological one: the negative impact of member states’ positions on Europe’s environmental legislation.

Indeed, while on one hand the meeting was falsely reassuring (in the way that all such initiatives are, provided that their goal is to inject public opinion with some sort of 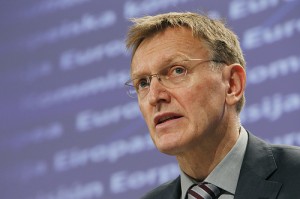 confidence towards european institutions’ pursuit of common good, despite the fact that they usually involve simple Q&A sessions), on the other it looked extremely helpful and effective in stressing how sometimes (thanks in part to the ongoing economic crisis) we end up misrepresenting the sources of Europe’s recent (and endemic) woes. In other words, as Mr. Potočnik put it (and as we often seem to forget), the European Commission’s role merely consists of proposing legislation, not adopting it, the latter being a power that pertains to the Council of the Ministers and, sometimes, to the Parliament. So, if we are to find a guilty, maybe we should start cleaning up our own houses by thinking to how member states (i.e. our native countries!) have long mismanaged the opportunities that the EU membership gave them and to how they are now blocking crucial progress on several environmental issues in the name of parochial interests.

Examples of this behavior, some of which surfaced during the meeting, are countless: from Italy’s chronic delay in the implementation European directives (such as in the case of common waste treatment’s rules) to UK’s veto on a recent proposal that aimed at banning the agricultural use of neonicotinoid pesticides, which have been proven lethal to bees population, going through the ferocious battle that continues to surround the debate on Common Agricultural Policy and Common Fisheries Policy‘s reforms, Europe’s fading influence on international climate change talks (not to mention its failing Emission Trading Scheme)  and, last but not the least, a general lack of willingness to encompass sustainability policies into economic development as a way of changing a seemingly rock-solid paradigm of growth.

I am not going to comment in deep on those matters, since it will probably take more than an op-ed to do so, but nevertheless I believe that the given picture portrays the nature of the problem quite well: the Commission, which here and there has tried to do its best on

many pressing issues (historically, it even was one the first institutions to be vocal about the shortcoming of Western model of development), has basically no power if member states decide to dodge reasoned arguments and embrace domestic interests instead. This is why very good reform proposals are constantly watered down when they reach the Council, and this is also why -in Mr. Potočnik’s words- Commissioners must usually avoid adopting bold commitments when they know that such measures will surely be rejected by a sufficient number of countries: considering that every state has its multitude of lobbies (most of which are enterprises that receive EU subsidies but don’t want to invest in sustainable practices in return), domestic interests, political gains to make, it is easy to see that environmental regulations come at a heavy cost most of the times.

In the end, if we want to address Europe’s woes (not only in the environmental field) we must realize that the Union is strong as long as its member states are credible, implement environmentally-sound national policies and then brandish them in order to lead on the international level. That is, we must look in the mirror and ask ourselves why ‘green’ governments which do so are nowhere to be found.

It is a privilege for USiena Sustainability project to be given the possibility to run its own blog on Rinnovabili.it. The following piece, which aims at welcoming the readers, contains a brief introduction to University of Siena’s track record on sustainability, as well as the presentation of one its major players on environmental issues, a student network called Greening USiena.

University of Siena is one of the oldest and leading publicly funded universities in Italy. 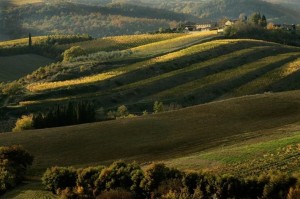 Apart from being located in a city whose centre has been declared a World Heritage Site by UNESCO, it also lies in a territory that is unanimously considered a maximum example of the ideal interaction between man and nature, with Siena’s hills and countryside attracting millions of people every year not just for its famous vineyards, but also for its wonderful landscapes. Given this unique geographical and morphological context, it is not surprising that this community has (consciously or not) shaped itself mainly following the concept of ‘local self-sustainable development‘, as it was later defined by great Italian architect and scholar Alberto Magnaghi; moreover, it is definitely not surprising that, in the last few decades, University of Siena has been a crib for pioneering research on environmental issues, providing leading figures in many academic fields, such as environmental economics and ecology.

Starting in 2011, a new wave in the sustainable development challenge has hit this institution, and students are looking forward to play a key role in the process. In the first place, a group of researchers and professors decided to come together and form Ne.S.So. (Network Siena Sustainability), an interdisciplinary network aimed at sharing separate competences and practices in order to enhance the standard of teaching and research, shape the sustainability debate at the national and international level and also make an impact on the local community. Then, in late 2012, it was revealed that University of Siena was about to get involved in United Nations Sustainable Development Solutions Network, a project developed by the United Nations and headed by author and economist Jeffrey Sachs, professor at Columbia University and founder of The Earth Institute, which is now on the launching pad.

This is when a group of students (us), combining different backgrounds and interests (from environmental economics to international law, from wildlife and wild habitat protection to 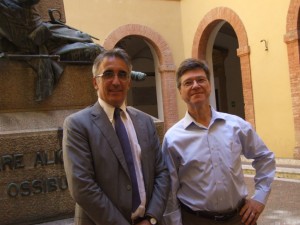 engineering and biology), decided to step up and ask our Rector to make them part of the ambitious task of making University of Siena a regional and international hub in sustainability. In other words, we wanted to be actively committed to the radical change that was unfolding in our school, not mere spectators of a top-down approach; we wanted to show the entire community that it was possible to join forces with professors and employees in order to enhance the study experience at USiena from an environmental perspective and also the impact of our actions on a broader context; we wanted, if possible, to make that change even more radical, merging advocacy and bold ideas with a wholehearted dedication to transforming policies from the inside, in cooperation with each willing stakeholder.

Thankfully, we found a lot of those willing stakeholders, who listened and responded to our request. From the Rector to researchers and so on, we managed to establish a strong collaboration which will hopefully contribute to deliver big improvements and establish University of Siena as a reference point on the defining issues of our time.

And there we are. Greening USiena has now been active for four months or so, and we are working as hard as we can (without losing

sight of our degrees, of course), putting our best efforts into this great task we put upon ourselves. The pathway we decided to undertake is not the easiest one, ascriticalities remain at both local and national level: just to give you an example, we study in a place in which historical buildings dominate the urban landscape and the university infrastructures themselves are usually beautiful but centuries-old, making it more difficult to achieve energy efficiency and limit waste heat; in addition, the situation of education in Italy is not the most encouraging one, being affected by long years of mismanagement and funding cuts operated by almost every government, not to mention the economic crisis and the international context as well, which undermine sustainability talks in our country but also on the global stage.

But we strive for success, as we are simultaneously embarking in both local and international initiatives (as University of Waikato’s Professor Alexander Gillespie told us during an interview we conducted with him during the launch of our network, “if you get too global, your feet don’t touch the ground; but if you get too local, things just pass you by“), thus abiding by the idea that just a local self-sustainable development could spark a change in international policies and influence the switch to a different global development model. As a consequence, we are working with the university’s personnel to reduce waste, achieve a better record on energy

efficiency, provide drinking fountains in order to eliminate plastic bottles from our buildings and boost the separate collection of rubbish, while at the same time we focus on students’ involvement in the Mediterranean Sustainable Development Solutions Network, the regional part of UNSDSN project of which University of Siena has been appointed as a Centre, and try to broaden our vision by organizing activities and events with the goal of sharing knowledge and distinct perspectives with other student groups or experts (i.e., we recently participated to a Google+ Hangout on energy issues with the London School of Economics Energy Society, as well as having the privilege to host, along with Alexander Gillespie, marine ecologist Giuseppe Notarbartolo di Sciara and an Australian Student Environment Network‘s representative during the official launch of Greening USiena).

All that said, we would like to thank the staff of Rinnovabili.it for the opportunity they gave us to share our experience on this website and hopefully encourage more young people to embrace the challenge of sustainability (both on campus and in the world) first-hand.